Ask for a link between Westerham and the war and I think most people will come up with Churchill and Chartwell. But there is a lesser known person associated with Westerham whose contribution significantly aided the winning of the Great War and quite probably the Second World War. He led no great battles but without him many battles could not have been fought, would have been lost and many soldiers could have died of hypothermia.

I’m referring to Lt. Colonel Peter Norman Nissen, DSO, (1871–1930) a Canadian engineer and British Army Officer, who designed the Nissen Hut. After the war he moved to Westerham in 1921 and lived on Westerham Hill until his death. He is buried in an almost anonymous and neglected grave in the churchyard of St. Mary the Virgin, at Westerham. 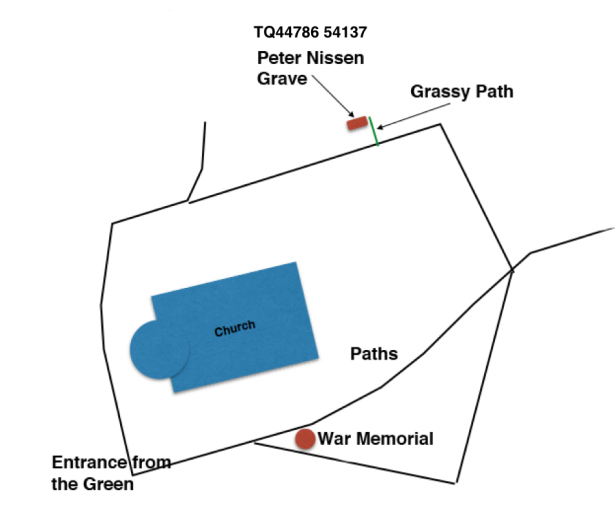 The Great War was very different to other wars Britain had fought. Apart from it being a ‘total war’ that involved and impacted on the entire nation, it was a ‘year-round’ war.

In previous wars armies tended to hibernate during the winter months and prepare for a Spring offensive. This was not the case during the Great War – soldiers needed to maintain a firing-line regardless of the weather throughout the year.

In December 1917 a solider wrote – “During my twenty odd months out here my average stay in one place has been eight days. I have lived in huts, billets, tents, dug-outs, and bivouacs of all descriptions – and occasionally with the sky as a roof.” He went on to complain that the Army did not believe one could overfill a bell tent. He thought a bell tent with 14 occupants was full – until he heard of one “made merry with 21 tent-mates”!

This problem was presented to Capt. Peter Nissen a Canadian engineer in the British Army. The design-brief he was given was to devise a cheap portable dwelling place wherein men could live warm and dry, cheap enough to be purchasable by tens of thousand, portable enough to be carried on any road, big enough to accommodate 24 men, simple enough to be erected by anybody and on any grounding, weatherproof enough to give adequate protection from summer heat and winter cold.

The design that Nissen came up with in May 1916 met these requirements and could be erected by four men in four hours – and became known as the Nissen Hut. The whole could be packed on any wagon, and although the hut weighed two tons no single part was heavier than could be handled by two men. The only tool required to assemble it was a spanner – although as will be seen in the video link below – good use was made of a hammer! Nissen had come up with what became a ‘design-classic’ that has lasted over 100 years and served the diverse needs of the military and civilian populations during both of the World Wars

The huts were dome-shaped, the exterior being of corrugated iron and the interior match boarding. There was a space between the exterior and interior layers  that provided insulation from the cold and heat. A correspondent at the Front said that from the door they looked a bit like a bit of a tube railway except the insides were wood rather than tiles. At one end there is a small stove. There are windows either end – but no glass.

The Nissen Huts appear to have been ‘warmly’ welcomed at the Front in January / February 1917.  A Front Line correspondent reported that the “Housing Problem is Solved in France’ – even though their beds were still on the ground.

The following link takes you to a film showing the building of a Nissen Hut:- https://film.iwmcollections.org.uk/record/2844

It is clear from the following images that the arrival of the Nissen Huts in the 1916/17 winter was timely and would have brought some relief from the horrors of the Somme.

Soon there were communities of Nissen Huts:

Perhaps not surprisingly it appears that one Nissen Hut accommodated four officers – rather less than the 24 soldiers from the ranks. One gets a sense of how ‘cosy’ the huts could have been from a letter sent home by a RAF Officer in June 1918. He  wrote of life in a Nissen Hut with a puppy that he adopted having found it deserted on a battlefield. He described the dog as a most faithful and affectionate animal that slept on a mat beside his camp bed in a Nissen hut, “which is a most comfortable affair, especially when divided into four private compartment as he and his hut-mates had done”.

The Huts, although initially commission to provide accommodation for troops their utility was soon recognised and were soon used to provide hospital and convalescence care for wounded soldiers. 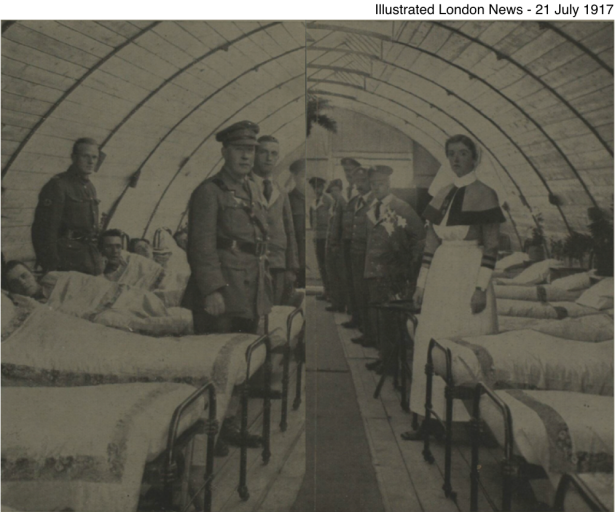 The Nissen Hut also proved to be extremely useful in providing workshops in which the machines-of-war could be hidden and worked on out of sight of the prying eyes of German pilots. One news report described Nissen Huts as being part of a ‘Tankodrome’: “Down a sunken leafy lane, cunningly hidden from the eyes of the Hun airmen is the Tankodrome. It consists of a small open space on which stands a few Nissen Huts with a sentry pacing up and down in front of one containing the stoves, Dressed in two lines are the quaint, ungainly landslips which have driven terror to the Hun breast. There are two types – male and female. The male is armed with two six-pounds, a Hotchkiss machine gun and four lewis guns. The female is armed with six Leis guns. Each weighs 30 tons and is manned by one officer and seven men. There were also some “whippets” – that wonderful, light one-man tank in this aerodrome – but of their detail it is better not to talk yet a while”.

The Nissen Huts were also used as churches as well as for entertainment – there was even a troop who called themselves the “Nissen Nuts”.

Nissen Huts were used to provide accommodation for civilians in France whose homes had been destroyed. 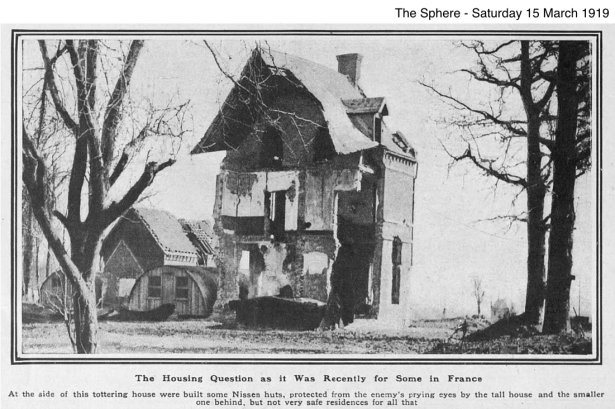 The signing of the Armistice did not lead to the immediate demilitarisation of parts of the country. For instance it was reported that close to the Great Western mainline at Slough there was a flourishing American township, covering 35 acres, with a population of over 350. There was a street of wooden huts and another of camouflaged green & block Nissan huts. The site had been the American dump for receiving, storing and sorting American war materials, and although the Armistice had been signed it remained as busy as ever.

Nissen Huts were also used in Britain to help address the shortage of decent accommodation. There were however concerns expressed in the press about the high cost of converting a hut into a home – £190. The journalist felt the aim “should be to encourage working men to secure their own homes on their own little bit of land”.

Over 100,000 Nissen Huts were manufactured during the Great War. Once the war was over they and much more equipment, became surplus to requirements. The Government therefore established a Ministry of Munitions Disposal Board (Huts & Building Materials Section) to organise auctions to dispose of surplus huts. The catalogue of items for sale suggest that Nissen could have been associated with other designs. In one sale was offered 300 “Nissen” steel tents, 100 “Nissen Shower Bathers and 300 “Nissen Bow Huts”.

Nissen tents may have had the same domed framework but rather than be covered with corrugated iron sheets it was covered with canvas. No image has been found of a ‘Nissen Shower’ but records suggest that Nissen patented a number of modifications to his design for portable accommodation.

The Nissen Huts were purchased for multifarious uses by the civilian population and almost certainly contributed to the post war regeneration – they were cheap and easy to erect  – two important consideration in post-war Britain in 1919 – and easy to move. They were therefore perfect for use as inexpensive and adaptable start-up units for small business, as farm buildings, garages and municipal services.

The simplicity of Nissen’s design inspired larger and grander projects – such as building airship sheds. 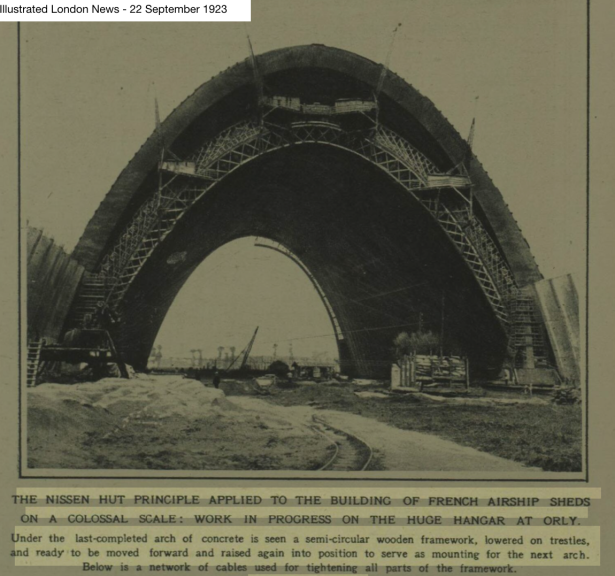 Although Nissen was not to see it, his Huts served well the military and civilian populations of Britain during WW2 – particularly in providing accommodation for bombed-out families.

Peter Nissen returned to Civilian life in January 1919. He was awarded the Distinguished Service Order and £13,000 for his design – about £250k at todays value.

Let’s hope some tribute will paid to him on the centenary of the Armistice. As said at the outset – he led no great battle – but without him many battles could not have been fought or would have been lost.

Geoff Ettridge – 17 July 2018. Based on a Walk from the 2014 book “If Walks Could Talk” that commemorated the outbreak of the war.