And the ‘story’ of the ‘missing’ portrait.

Visit the Guildhall Museum in Rochester and you will see portraits of two of the three men, Sir Joseph Williamson and Sir Cloudesley Shovell, but not the third, Mr. John Byng – the reason for this will become clear.

Rochester until 1885 was represented in Parliament by two MPs. Owing to the proximity of Chatham dockyard and the Admiralty being the largest employer at Rochester, the Admiralty often nominated both men to represent Rochester – one of whom was always an admiral. Sir Joseph Williamson, Sir Cloudesley Shovel and John Byng were all Navy nominations. Elections at this time bore little resemblance to those of today. The ‘nominated’ men were at this time elected by an electorate of probably no more than 600 freemen of Rochester – many of whom could have had trade connections with the Navy.

The contribution made by these three men in making the British Navy so effective had little to do with their roles as MPs – their contributions, that I will be considering, were made postmortem!

Sir Joseph Williamson is best known in Rochester for leaving £5,000 to establish a Free School. The bequest stated the money was to be used “towards the building and carrying on and perpetual maintaining of a free school at Rochester for the instructing and educating of such youth there who were or should be the sons of freemen in Mathematics and all other things which fit and encourage them for the sea service and arts and callings leading and relating thereto”.

Joseph Williamson was a leading politician and diplomat during the reign of Charles II  and less so during the reign of James II. He was regarded as a competent administrator but it would seem he was not particularly popular. He was elected as MP for both Thetford and Rochester in 1690 and eventually settled on representing Rochester. He was also a Bridge Warden or to be more accurate for the time, one of the ‘noblemen and gentlemen of Rochester Bridge’.

Although clearly a ‘career’ politician / civil servant, Williamson’s main interests were in law, history and genealogy – so how he became the second president of the Royal Society is unclear. However Robert Hooke wrote in 1677 that Williamson showed a great interest in mathematical instruments and algebra.

Combine this interest with his business / shipping / trading interests and an explanation could become possible for why he wanted to fund a free school dedicated to navigation and seamanship. Being such a ‘nobleman’ in Rochester he would also have had close associations with the Admiralty.

The school established with Williamson’s legacy moved from Rochester High Street in the 1960s, and is still known as the Sir Joseph Williamson’s Mathematical School or locally as the Math School.’

Sir Joseph Williamson would have undoubtedly been aware of the problems that weather posed for navigating by the stars, as well as the calculations / extrapolations that would have been necessary to place a ship’s location, between readings, based on speed and direction of travel. Establishing a school dedicated to ensuring there was a ‘supply’ for young men skilled in the mathematics associated with navigation would have been essential to the Navy as well as commercial shipping.

Admiral Sir Cloudesley Shovell was in command of a fleet when the Navy suffered its worse ever disaster with the loss of four warships and the lives of 1,550 sailors, off the Isles of Scilly. As a consequence of this loss the Government upped its efforts to develop a reliable – all weather – means for navigators to determine how far east or west they were from a known position.

Cloudesley Shovell was clearly an able and experienced seaman. He rose through the ranks from Cabin Boy – reaching the rank of Admiral of the Fleet in 1705.

In October 1707 Shovell was making his way home with a fleet of 20 ships, following naval engagements with the French. Due to thick cloud cover that had lasted for some days, Shovell had not been able to check his position against the stars. He therefore ordered the fleet’s navigators to check the fleet’s position by measuring the depth of the water and sampling the sea bed. This led Shovell to – wrongly – conclude that the fleet was in safe waters and heading into the English Channel. At around 8pm on 22 October the lookouts spotted rocks and the light from the St. Agnes lighthouse. Far from heading towards safe waters the fleet was heading towards the dangerous rocks and reefs surrounding the Isles of Scilly. The Association on which Shovell was travelling, the Romney, the Firebrand and the Eagle all floundered on the rocks – with the loss of over 1,500 lives.

The disaster has recently been put down to poor navigation skills, poor charts and contradictory information contained in various navigation manuals – the combination of which led to the navigators wrongly placing the fleet.

In order to prevent a reoccurrence Parliament passed, in 1714, the Longitude Act in which a prize of £20,000, comparable to £2.5 million today, was offered to the person who could solve the longitude problem. The prize was eventually won by John Harrison who designed a maritime timepiece that could cope with the rigours of being at sea and fluctuations in / extremes of temperature.

The watch-sized timepiece enabled a navigator to accurately place a ships position on the longitude – how far east or west it was from the Greenwich Meridian – by comparing the ‘time’ of the local midday against that of Greenwich.

By 1736 Harrison had a working marine timepiece that could establish longitude but it was not reliable. Work / sea trials to refine the timepiece were shelved during the war with Spain, (War of Austrian Succession (1740/48)), for fear of it falling into the hands of the Spanish.

The prize was paid out in stages as Harrison gradually perfected his timepiece. The final payment was eventually awarded to him in 1773 – nearly 70 years after Shovell’s naval disaster.

Locally we can still see evidence of Cloudesley Shovell’s generosity to Rochester. In the Guildhall Museum, where a portrait of him hangs, there are amazing ceilings created at his expense. Shovell also donated a bell used to signify the opening and closing of the market, paid for the brick facade for the butchers market / Corn Exchange, and the original clock that projects over the high street. Shovell’s clock, which was replaced in 1771, apparently because of poor maintenance by the Corporation, had a square face.

Admiral John Byng was executed by firing squad on the quarterdeck of his ship, HMS Monarch, anchored in Portsmouth Harbour, for failing to do his utmost to engage with the enemy. He was the first and last Admiral that ‘we’ have executed.

Despite having a previously unblemished career Admiral Byng was executed at 12 noon on 14 March 1757 for failing to do his “utmost” to engage with the enemy. He met is fate with dignity and courage, fastening his own blindfold. He knelt and prayed for about a minute before dropping his handkerchief to indicate he was prepared.

Six of the nine marine firing squad loosed their fatal volley – leaving three muskets still primed to deliver the coup de grâce should that have been necessary. 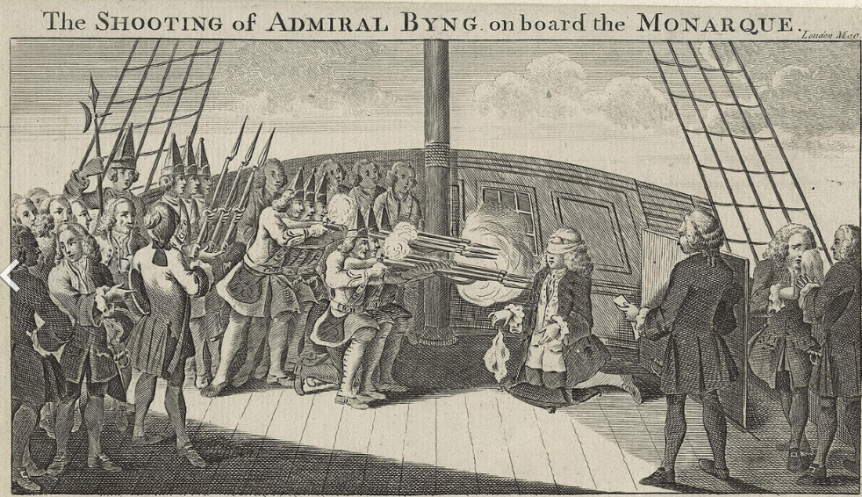 John Byng, the son of George Byng a successful battle-honoured Admiral, joined the navy when he was 13 and quite probably nepotistically moved through the ranks to become an Admiral himself. John though was not as gifted as his father and was largely untested managing a fleet in the Mediterranean. Things though changed with the outbreak of the Seven Years’ War in 1756, when the French took Minorca.

Byng was ordered to relieve Minorca with his poorly maintained fleet that was crewed by inexperienced sailors, many of whom had been press-ganged, or prisoners who had ‘volunteered’ in order to get early release. He had no marines on any of the ships in his fleet. On arriving at Gibraltar Byng found there was insufficient ammunition to arm his fleet.

In this parlous state the inexperienced Admiral entered into battle with the French. The French gave Byng’s fleet a good hammering and sailed off. Instead of pursuing the superior French Fleet – which could have easily outrun him, or continuing to the Minorcan garrison which he had little hope of relieving as it was surround by 16,000 French troops, Byng decided to return to Gibraltar to repair, refit and reinforce. This decision put him in contravention of the Admiralty’s Articles of War which required him to engage with the enemy.

Byng was court-martialled and although the Panel decided his decision to return to Gibraltar was right they had to find that he had failed to engage with the enemy at Minorca. They therefore had no choice but to find him guilty and to pass the death sentence.

Members of the Panel took the exceptional decision to try to get the conviction overturned in the House of Lords but they were unsuccessful; George II also refused to issue a pardon – perhaps to get his own back on William Pitt who had made him relinquish his title of ‘Elector of Hanover’.

It appears the only honour afforded to Byng was that he was executed by firing squad on the quarterdeck of his ship as opposed to the poop deck.

The full record of the events that led up to his court martial show that the worst Byng could be accused of was being over cautious and perhaps a little unwise, as it turns out, for not denouncing his masters.

In the light of Byng’s unblemished career, and his peers agreeing his decisions were sound, there can be little doubt that he was a sacrificial pawn in a complex political game. The Admiralty would not acknowledge their failings in protecting Minorca in the first place, or failing to maintain a fit-for-purpose fleet. Indeed when they released Byng’s account of events they had deleted any criticisms of their role in the affair.

Despite the injustice of Byng’s execution – sometimes referred to as ‘judicial murder’ – it created a culture of ‘aggressive determination’ in the Navy which may well have helped us acquire and defend the British Empire; but Voltaire in his novel Candide was a little more cynical – “In this country, it is wise to kill an admiral from time-to-time to encourage others.”

The Newgate Calendar reported: “Thus fell, to the astonishment of all Europe, Admiral John Byng who was at least rashly condemned, cruelly sacrificed to vile political intrigues.”

Byng’s body was buried in the family vault in Southill that bears the following inscription:

To the perpetual Disgrace of
Public Justice
The Honourable John Byng
Admiral of the Blue,
Fell a Martyr to
Political Persecution,
On March 14, in the Year 1557;
When Bravery and Loyalty
Were insufficient Securities
For the Life and Honour
Of a Navel Officer.

The execution of John Byng, an Admiral of the Fleet, for failing to do his utmost to engage with the enemy ensured that no British Naval Officer would ever do anything less than aggressively engage with the Country’s enemies. He might be killed in battle – but if he avoided battle, regardless of circumstances, his superiors would kill him!

There is no known evidence of John Byng’s association with Rochester and no portrait hangs of him in the Guildhall Museum. His descendants have been seeking a pardon for John Byng on the basis that the verdict was unjust as his peers who sat on the Court Martial agreed his actions were right and proper in the circumstances. Perhaps Rochester could do him the honour of hanging a portrait of him in its museum?