Lady Jane Grey – beheaded 17 days after the fall of Rochester.

On 12 February 1554, Lady Jane Grey aged 16 or 17 was beheaded. Was her execution related to events that occurred 17 days earlier in Rochester – which could have also been the ‘first shots’ in a religious civil war?

Lady Jane Grey had been ‘nominated’ by Edward VI, on his death bed, to succeed him in preference to either of his half-sisters Mary and Elizabeth. Although the Privy Council initially wished Jane to assume the monarchy, Jane was unaware of their plan. A few days after Edward’s death, the announcement of which was delayed, Jane was proclaimed queen on 10 July 1553. The announcement was not well received. The public did not know who Jane was and they felt Mary, who was of Henry’s blood, was the rightful heir to the throne. The proclamation of Jane as queen brought the country to the brink of a religious civil war between the supporters of the Roman Catholic Mary and the Protestant Jane.

In the light of threats and promises made by Mary, and the widely held disdain for Jane as queen, the Privy Council’s support for Jane rapidly diminished. On 19 July 1553, the ninth day of her reign, the Privy Council shifted their allegiance from Jane and proclaimed Mary to be queen. At that point the Tower of London ceased being Jane’s palace and became her prison.

With Mary on the throne Jane remained ‘accommodated’ in the Tower of London and was finally convicted of High Treason in November 1553. Despite this inevitable finding, and against the advice of her advisers, Mary was in no hurry to have her cousin executed. Indeed she had shown considerable mercy towards those who had proclaimed Jane as queen – including Jane’s father, Henry Grey, 1st Duke of Suffolk.

It is quite possible that Mary may well have allowed Jane to live. Mary had the populist support of the people which in turn forced the nobility to support her. Jane was effectively ‘out of sight – out of mind’, and there had been a successful and concerted effort to eradicate her from all the records. Indeed there are no pictures of Jane painted in her lifetime. The picture in this blog was painted some 60 years after her execution but is believed to be the closest likeness there is.

The only thing that Jane could have done to improve her circumstances was to renounce her protestant faith but she appears to have posed no threat to Mary’s reign. However all changed in January 1554 when Rochester did not resist the forces of Thomas Wyatt, the younger, whose action were perceived as a threat to Mary’s monarchy.

Thomas Wyatt was initially a supporter of Mary. However her proposed marriage to King Philip II of Spain was a step to far – a Spanish King on the English throne was regarded by many as a major affront to England’s National pride.

Thomas Wyatt and others from across the country, agreed to raise an army with the intention of preventing the marriage. Despite all the ‘big-talk’ by a number of nobles – including Lady Jane Grey’s hapless father – only Wyatt succeeded in raising an army. 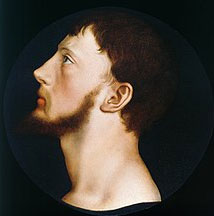 Men prepared to enlist with Wyatt gathered on Penenden Heath. With 1,500 men and a promise of 5,000 more, Wyatt decided to take Rochester that had declared its loyalty to Mary. There was in fact no battle as the City capitulated and Wyatt was able to raise, unchallenged, his standard over Rochester Castle and make it his headquarters. It would seem that the folk of Rochester were reassured by Wyatt saying his intention was not to harm the queen but to prevent her marriage to the King of Spain – a marriage which presumably the people of Rochester did not welcome?

Wyatt’s ‘rebellion’ was further emboldened at Rochester when the crews of the royal ships lying in the Medway went over to him – along with their guns and ammunition – and a contingent of royalist troops, known as Whitecoats, with whom Wyatt was about to engage at Strood, defected and joined the rebellion!

At this point had Wyatt advanced on London, as he was advised, he may well have successfully entered the city, however he first decided to attack Cooling Caste. I’m not in a position to form a view whether this made military sense however it used up ammunition and gave more time for Mary’s troops to consolidate their defence of London. When Wyatt finally advanced on London, on 3 February, he and his rebellion was soundly beaten.

Seventeen days after the ‘fall’ of Rochester Lady Jane Grey was executed. It’s impossible to say how long Mary would have allowed Jane to live. It might have been indefinitely as Jane didn’t have the popular support required to mount any challenge to Mary’s monarchy. However when people – particularly from Kent – took exception to Mary’s marriage plans, Jane, again, through no action instigated by her, became a victim of circumstances.

As a rallying point for those disaffected with Mary’s reign Jane could have represented a threat that needed to be ‘neutralised’. But why Jane should have been viewed as a greater threat than Elizabeth is not clear. Executing Elizabeth would certainly have been provocative – she was after all Henry’s daughter. Perhaps Jane was executed less for the threat she posed and more as a warning to Elizabeth and her supporters not to challenge Mary?

Whatever the deeper politics may have been, Rochester played a part in this short but significant period in our history. It’s impossible to know – but what if Rochester had remained loyal to Mary and successfully resisted Wyatt’s army? Could the future of Lady Jane been very different? Could the rebellion have fizzled out and Jane spared? 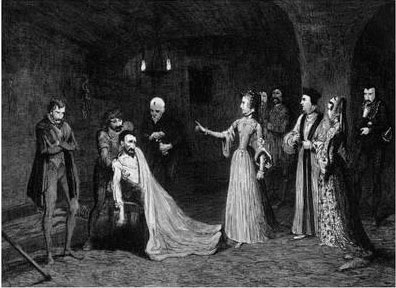 Wyatt was tried for High Treason and was hung, drawn and quartered on 11 April 1554. Henry Grey was more ‘fortunate’. Although Mary could not offer him mercy, again, she allowed him to be beheaded on 23 February 1554. The delay in executing Wyatt was because he was subjected to torture in the hope of ‘extracting’ details of his fellow conspirators – notably Princess Elizabeth.

Fortunately for England Wyatt did not implicate Elizabeth otherwise she may well have also been executed. The image is of princess Elizabeth being confronted with Sir Thomas Wyatt in the torture chamber.

The History and Antiquities of Rochester published ?1772